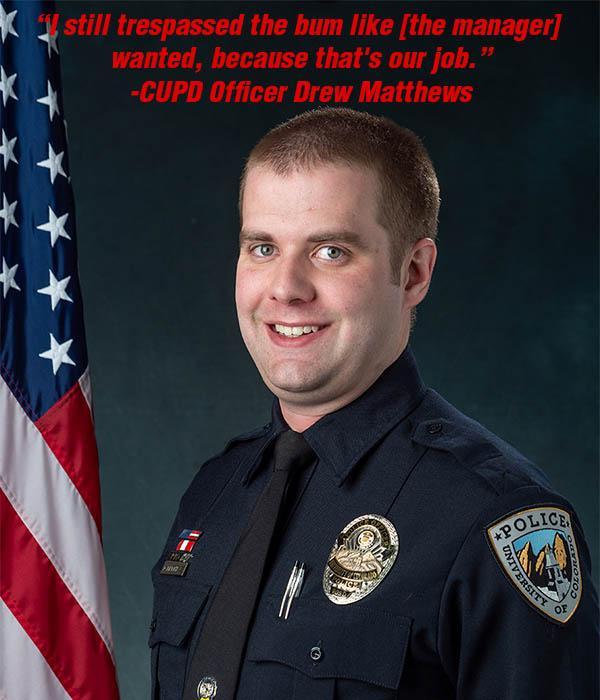 The Reddit user /u/BocoRam18 is highly active on the site, posting frequently on law enforcement themed subreddits and weighing in on local political issues. Not only does he espouse reactionary, bigoted views, openly flaunting his hatred for homeless people and fantasizing about violently attacking them, but he also posts openly about his job as a University of Colorado police officer. This caught the eye of SAFE Boulder members, who identified the user as Drew Matthews.

This now-deleted Reddit comment written by Matthews illustrates his contempt for houseless people. In response to body camera footage of a Seattle Police officer violently arresting a suspect, he writes:

Seattle is a perfect example of hands off policing with the tranisent population. Fucking gross ass tent towns, drugs and shit everywhere, because they don’t want the police dealing with them. I say call in fire with the police and just spray the hoses at them till they leave, even if they don’t they get a shower out of it. Also Seattle transients are the entitled shitheads who choose to be homeless, walking around with brand new phones and shit.

A commenter points out that attacking undesirables with firehoses is the same tactic used against Black civil rights protesters in the 60s, to which Matthews replies, “Hey they are getting a bath at the minimum.”

/u/BocoRam18 was identified as Drew Matthews because he posted the same photo of a can of beer at the top of Torreys Peak on both his Reddit and Facebook accounts.

Drew lists the University of Colorado Boulder as his employer on his Facebook profile.

/u/BocoRam18 is a verified Campus Police Officer on the /r/ProtectAndServe subreddit, meaning he submitted a photo of his CUPD ID to forum moderators.

In response to an article about Black Lives Matter Sacramento confronting Terrence Mercadal, one of the officers who murdered an unarmed Black man named Stephon Clarke, Drew Matthews writes that he would have “[made] it into something” and have the protesters “trespassed and charged with harassment.”

In one comment, Matthews invokes the Angry Black Woman stereotype while advocating for carceral punishment and writes “Hell hath no fury like a black mother.”

In another comment on /r/ProtectAndServe, Matthews describes stopping every Black man at a party.

Below is a screenshot of Matthews’ response to an article about Zayd Atkinson, the Black Naropa student who was held up by eight Boulder Police Officers while picking up trash outside of his home, leading to the resignation of the instigating officer. In this comment, Matthews justifies the racial profiling of Atkinson because he looked “like a transient” and states that the Boulder Police Department was running extra patrols at the time due to “transient activity.” Black people make up just 1% of Boulder’s general population but 12% of it’s homeless population, and the Boulder Police Department pulls over and arrests Black people at twice the rate of white people.

In another comment, Matthews expresses frustration that Zayd Atkinson’s story received media attention, and says that Boulder “stinks of transient shit” as a result of Officer Smyly’s resignation.

Contempt For the Poor

Matthews’ contempt for local unhoused people is a common feature of his Reddit posts. He frequently describes them as “bums” and “addicts,” like in this post where he writes, “Can we send the bums to Portland.”

In one post on /r/Boulder Matthews says the quiet part out loud, admitting that his job requires him to protect the interests of business owners by kicking “bums” off of private property whenever requested by management.

On a post in /r/Boulder, Matthews blames all the trash in the Boulder Creek on homeless people.

Matthews has also advised people not to spend time at the Boulder Bandshell because “all the homeless hang out there.”

In another thread, about the conviction of two Boulder County Deputies for killing Demetrius Shankling, Matthews writes about police officers (as if he weren’t one): “[I] bet they feel like baby sitters on some calls they get, noise complaints, not wanting to look at the smelly transient, etc…”

Officer Drew Matthews also parrots many of the anti-homeless myths that proliferate on Nextdoor and other anti-homeless platforms. One such myth is the common, but unfounded claim that all people experiencing unsheltered homelessness in Boulder are making the individual decision to refuse the city’s ‘bountiful’ services, because they are materially better off living on the street. The reality is that the City of Boulder’s homelessness services are slow, gatekept, and inadequate. For example, Homeless Solutions for Boulder County prohibited people living in Boulder County for less than 6-months from accessing most services up until the ACLU declared the requirement to be unconstitutional. In regards to housing, there are hundreds of people awaiting housing from the City of Boulder’s housing program. In a private conversation with City Attorney Chris Reynolds, SAFE activists learned that the fastest anyone has ever gotten housed from Boulder’s Housing First strategy is 5 months, while many placements take years.

In a thread about the Fox Theater and the Boulder Theater’s vaccine requirement, Officer Drew Matthew’s writes “[homeless people] are like cockroaches, immune to everything now.”

In a thread about Cafe Aion’s vaccine requirement due to the COVID-19 pandemic, Officer Drew Matthews compares the private business’ mandate to the state manufactured genocide of Jewish people in the Holocaust, writing “If people told you to wear a star on your shirt you’d do it.”

Officer Matthews is referencing the yellow star Nazi leaders forced Jews to wear in order to facilitate their genocide during the Holocaust.

The COVID-19 anti-vaccine and anti-mask movement has appropriated yellow Stars of David as symbols of their perceived oppression, a move that has drawn heavy criticism from Jewish groups, including the Auschwitz-Birkenau Museum and the Montreal Holocaust Museum.

Police resistance to COVID-19 public safety measures are an increasing concern. Axios reports that “scores of police officers are refusing the COVID vaccine.” This includes 57% of the Denver Police Department, whose union resisted a citywide vaccine mandate.

I still trespassed the bum like [the manager] wanted, because that’s our job.

Officer Drew Matthews’ poor informational security has given us a unique glimpse into the mindset of the University of Colorado Boulder Police Department, who regularly torment, harass, and arrest vulnerable members of our community.

As Lee Shevek (@ButchAnarchy) notes, police serve an integral function in the systemic manufacturing of homelessness in the so-called United States. Police evict tenants, wrap people up in the violent and financially ruining carceral system, sweep homeless camps, and enforce laws that disproportionately target houseless people, such as public consumption laws and urban camping bans. Given that Matthews’ job as a CUPD officer positions him as fighting against the problem of homelessness, all while requiring him to enforce ordinances that perpetuate it, his bigoted views against poor people come as no surprise. The violent, fascistic language displayed by Matthews and other members and defenders of law enforcement treats unhoused people as scapegoats for worsening systemic issues that they themselves work to exacerbate. Officer Matthews’ view that all homeless people in Boulder are “bums” and “junkies” is likely the prevailing opinion in the University of Colorado, Boulder Police Department, and not the exception.

No amount of retraining will stop a right-wing institution such as a police department from being right-wing. Police have oppressed every single movement for social progress and justice in the history of the so-called United States, from the abolition of slavery, to the labor movement, to the civil rights movement, to the struggle against environmental destruction. Police are the enemy of equality, and all movements fighting for a better world, no matter how big or small, need to contend with this reality.