Rally to Stop The Criminalization of Homelessness 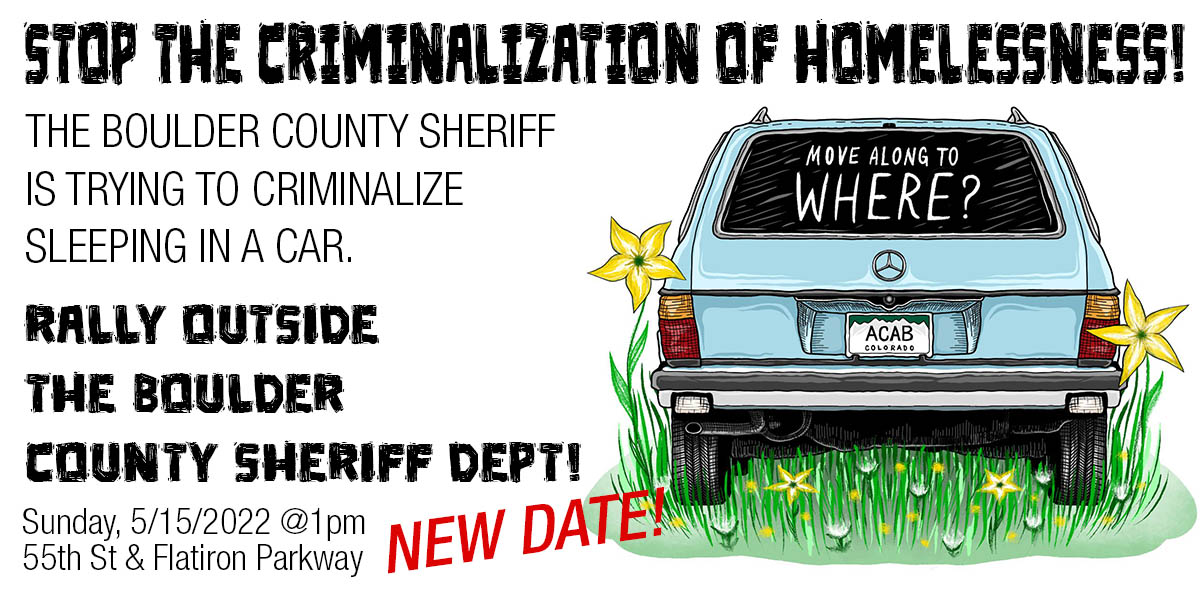 The Boulder County Sheriff’s Office is pushing the County Commissioners to adopt an ordinance that will fine people for seeking shelter from the elements in a car, sleeping bag, or a tent. Sheriff Pelle has stated that this ban will primarily target people experiencing homelessness, which has been rising in the county and nationally. The effect of this ban will be to further impoverish and criminalize people experiencing homelessness, worsening the economic circumstances that lead them to be living in their car in the first place. Additionally, laws that target the homeless disproportionately impact people of color, LGTBTQIA+ people, and disabled people, as those populations are grossly overrepresented in the homeless population.

We will be meeting on the corner of 55th St & Flatiron Parkway at 1pm on Saturday, May 14th and marching to the Sheriff’s Office to let them know that Boulder isn’t going to stand for further criminalization of homelessness, especially not after 1000 homes burned to the ground in the Marshall fire.

We have a couple asks:

The County Commissioners are meeting on May 19th at 9:30 am over Zoom to discuss Sheriff Pelle’s authoritarian ordinance 2022-1. We will update this page when the public comment info is available.

We also need you to email the Board of Commissioners to express your opposition to ordinance 2022-1 here: commissioners@bouldercounty.org

Sheriff Pelle has come under fire in recent years for overseeing the torture of Lauren Gotthelf, who was strapped to a chair and electrocuted in the Boulder County Jail, resulting in a $400,000 settlement and permanent brain damage. Lauren was brought the jail for smoking a cigarette and having her service animal off leash on the Pearl Street Mail in Boulder.

Sheriff Pelle also hired disgraced Boulder Police Department officer John Smyly, who was forced out of the department after instigating a racially motivated stop of Zayd Atkinson outside of his home in Boulder. Officer Smyly stopped Zayd, on the grounds that he looked like a “transient” (aka homeless) and demanded that Zayd drop his “weapon” which was a bucket and trash grabber. This situation escalated into 8 cops with guns drawn detaining Zayd.